The Luther Garten is a younger community garden in an eastern part of Hamburg that was founded in 2014. The special feature of this very large garden area of 14,000 m² is that it is part of the administration of the Protestant parish of its Hamburg district. In this context, the possibility for the church in Germany to grant refugees church asylum was combined with the first aims of bringing people together of all origins and religions living in the neighbourhood. There is a small cottage in the garden, in which refugee families are accommodated for the period of their asylum permit (about one and a half years). At the moment only one migrant family at a time is accommodated for this period. Refugees are currently only a small part of the 50 or so people who use the garden for gardening, cultural or spiritual reasons. If guest members or spontaneous visitors are added, around 200 people visit the garden. The garden is administered by Baluga Council who consists of the pastoral church members and residents who are responsible for running the garden, organising events, collecting donations and looking after asylum seekers. 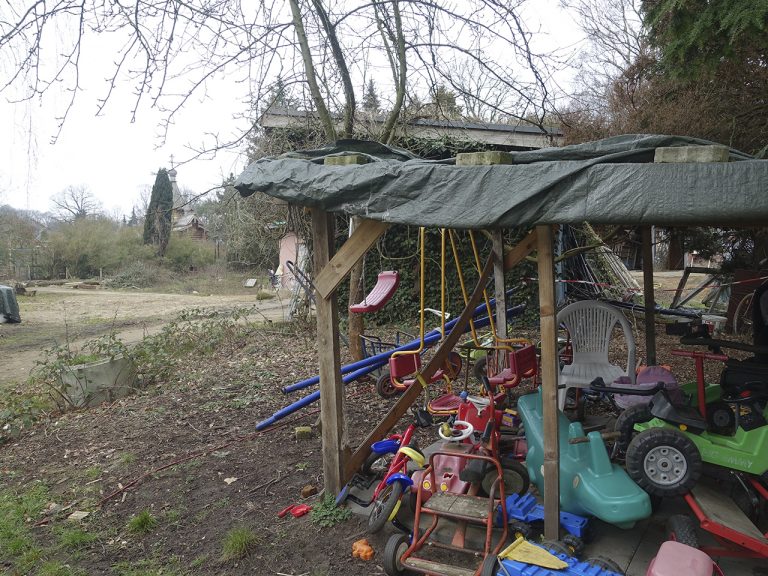 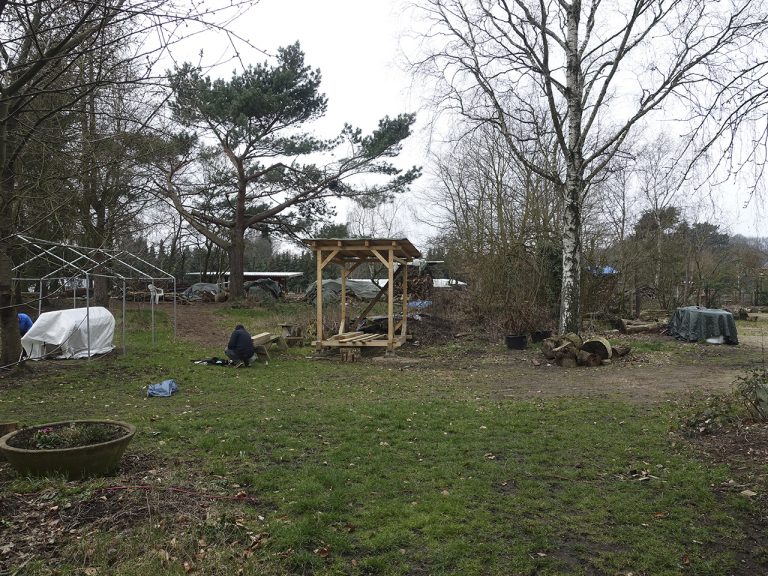 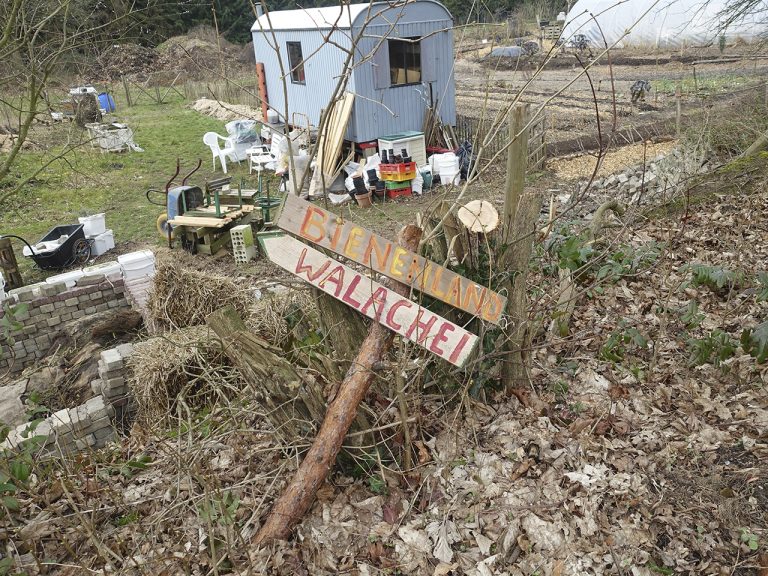 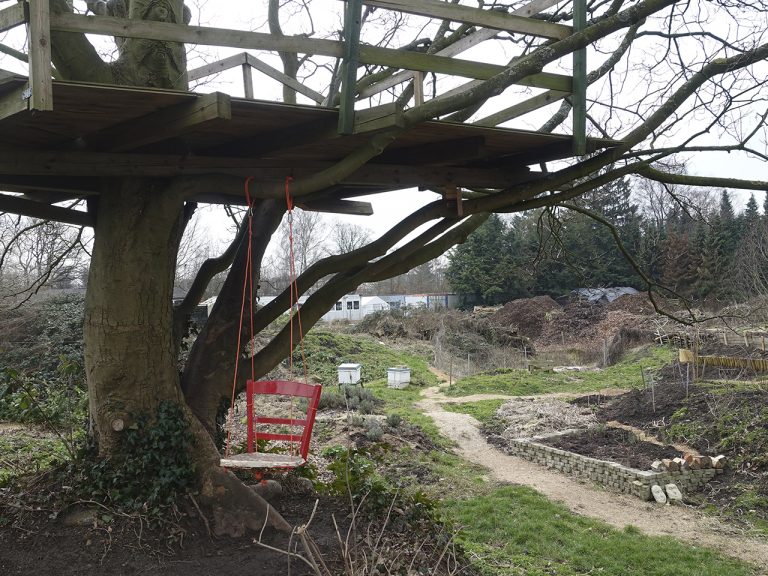 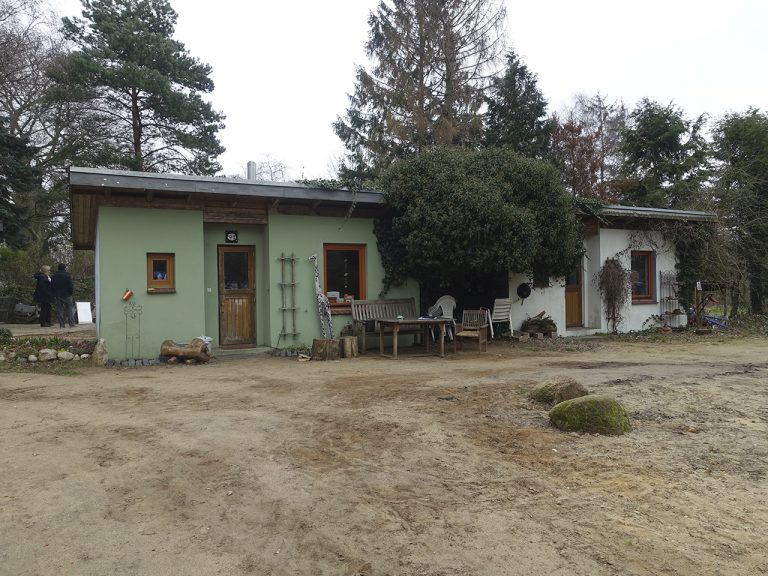 The garden is situated in the outer part of Hamburg in a mixed area of housing and company buildings. In the neighbourhood there are cemeteries related to other church communities (not Protestant), which results in a calm and introspective surrounding. The area was limited to 15 years lease by the church community from the church parish association Altona. The initiative to start the garden came from a small group from the Luther parish around a pastor who was interested in gardening. The availability of the area was very conducive to the implementation of this idea. At the moment, with nearly 14.000m² area, the garden is far from being fully used. Every member or person who wants to join the community is able to use land plots for his/her own interest. The garden contains a larger acreage of permaculture land (including a foil greenhouse), several raised vegetable and herbs beds, plots with wild flowers and bee hives. The individual working areas and beds are usually in the care of individual responsible persons. However, the use or cultivation of the beds can be extended to all interested garden users or visitors of the garden. Besides horticultural usage there are places for spiritual gatherings, altars, and “places of peace and reflection”. There is also a trailer for tools and material and the cooking house. The refugee cottage is placed beside the other buildings, so that the family is directly involved in all activities. All board members (“BaLuGa-Rat”) and garden users are volunteers except for the pastor who is the head of the member board. Foundation investments, which was around 15.000€ and yearly running costs for the garden development (3,500€ rent and ancillary costs, material) were mainly funded by financial donations, material donations (e.g. stones, working machines, toys, horse manure), active fund-raising and local prizes won for the public welfare concept.

From the beginning the garden was meant as a social project that was also but not explicitly meant to include refugees of the district. In Bahrenfeld there is a huge refugee reception centre and several places of refugee accommodation still exist. Unfortunately, permanent inclusion of a high number of refugees in the garden does not happen as the rapid resettlement of refugees in other refugee centres means that people are moved around a lot. In addition, many of the migrants visiting the garden have so far shown no long-term interest in the garden, which is an even greater challenge for the board. Many refugees living in the district spontaneously visit the garden after invitations by the congregation, specifically promoted garden events, and because it is close to a neighbouring clothes and food counter for refugees and poor people. The garden board is still trying to find ways of including more migrants in the garden or to motivate a group of migrants to install their own project in the garden, but have found no effective solution yet.

There is some cooperation between the Protestant church as leaseholder of the area and the garden project. One of the pastors is the head of board and his colleagues in the church community have management tasks and actively promote the garden events and working tasks to the church community of the district. Board members or garden users are also volunteers in other social institutions such as food counters or migrant language courses. For plant cultivation and horticultural issues there is the help of professional gardeners who themselves are involved in the garden (e.g., a specialist of permaculture) or other local horticultural companies. Groups such as kindergarten children or horticultural clubs visit the garden regularly.

The intensive voluntary work with a low number of refugees is seen as much more fulfilling and important than in bigger refugee centres. The variety of functions and possibilities in the garden (from food production to places of recreation) is beneficial for all the users of the garden. The interviewees confirm that most of the people involved in the garden had only a limited interest in gardening and little experience of working closely with other cultures before their involvement.

This is especially true for traumatized refugee families (the flight of a current domiciled Afghani family with two small children lasted more than two years). The garden is a place where people can settle down and find a new life through garden activities and the friendly inclusion in a nurturing volunteer group. Despite this, there are no formal language classes offered for them. Learning the German language for every-day use is a very fast process through the daily interaction with each other. As there is no need for the effective produce of food and vegetables, work in the garden does not represent excessive demands for them.

The main way of managing the garden is through communication and the coordination of tasks and responsibilities (e.g., for organising the monthly ‘open garden day’). The “community garden concept” is still the main driver. Therefore, there is no allocation of single garden slots to individuals. Strategic decisions, upcoming internal conflicts and administrative problems are discussed and decided in the garden administrative board (“BaLuGa-Rat”). Over time, decisions on specific working areas are transferred to non-board members when routines and trust has evolved (e.g., the managing of the permaculture unit). The organisation of the garden project requires certain skills (e.g., communication, knowledge, coordination talents, economic understanding) at the upper management level (administration board). For the rest of the garden users, soft skills such as openness, kindness, patience, and friendliness are beneficial. The board members agreed that no social project is without conflicts. But they all emphasise the solution-oriented work within the project organisation.

Despite the fact that the refugees find shelter in the church in consultation with authorities, this has also meant a certain kind of isolation and a lack of social inclusion and empowerment for the refugee family. However, the volunteers in the garden take thorough care of the refugee family, so that they experience inclusion in a mainly German community and are able to learn the language very quickly.

As there are no fixed times when the garden users need to be in the garden the garden group and joint subgroups (e.g. the bee and chicken keepers) use channels of communication such as chat platforms, email and phone or meet each other independently of the board. This is also important for taking care of the residing refugee family and keeping up social contacts with them. The current circumstances mean the initiators and Board members are very satisfied with the development of the garden. The basic premise that no ambitious goals must be expected reduces major challenges for the garden. The interviewees look back on having a good time and would use the garden again.

In the background, founders of the garden project experienced a lot of support from social networks and the local gardening group for the garden development, and help from a migrant advice centre also run by the church whose role is to provide empowerment of volunteers in dealing with social issues.

An important benefit of the initiative is seen in the open-mindedness of the local community, where refugees are regarded as fellow citizens, e.g. in the joint garden events or seasonal feasts. The garden is a place of possibilities with lots of space for many people with many ideas. The garden is for users or visitors of the garden as well as those who want to garden and create a garden together. Other people may clean out the houses, build campfires, create a playground, build a clay oven or a chicken coop, cook food romp, or solely use the garden as a “place of reflection”. It is place for relaxation and reflection, at the same time a place for learning and play for school classes, boy scouts and kindergartens and a place for various events, for example for Easter bonfires, open-air church services, open-air cinema and much more. Another special concern of the garden is the promotion and conservation of biological diversity and sustainable food production.

From the perspective of the interviewees, the main success factors and of the initiative are: